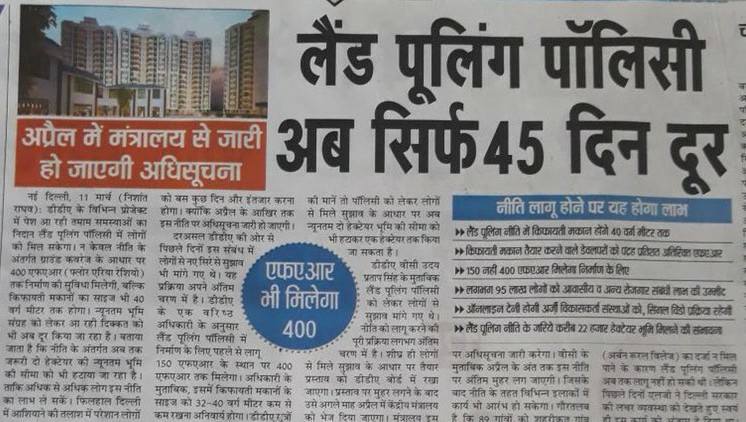 Public suggestions are thoroughly welcomed and are taken into consideration

By the last day of the April 2018, the Pooling of Land in the city of Delhi will be completed. This policy will provide residents to 95 lakhs Delhi population. It will also promote the economic advancement as said by Udai Pratap Singh, the vice chairman of DDA (Delhi Developmental Authority).

According to his interview to the reporter, he said that the public suggestions are duly taken and examined and everything will be concluded within the last day of the month of April.

“A team of hearing has been conducted and every bit of suggestions has been taken into account and lawful steps will be taken. Post the evaluation of all the suggestions, a series of hearing in the public will be conducted which will be also discussed with the Authority at the meeting. When the Authority will approve, the whole set of approval will be issued for notification from government. In this way, the whole process will be completed, “Vice Chairman DDA says.

Last year December saw the quick completion due to the simplification of the policy. The role of the planner and facilitator was given to the DDA and were also charged with the completion of the simplified policy of pooling of land. The deadline for receiving suggestions and disapproval from public forum was 24th February 2018.

According to the original plan, the policy that conducted the land pooling was assigned to DDA. DDA will do its part as Developer Entity (DE) would take the responsibility of the more planning of every sector and the infrastructural development in the land that was pooled. But in the December, it was decided that these provisions are not necessary and the tittle of the land will be attached with the actual owners of the land.

A unilateral-window ensuring the clearing of all the mechanism was given to DDA that will help for the quick generation of implementation and the approval necessary for them.

The area of Greenfield that is covered under the Land Pooling Policy was divided into five zones as per the Master Plan 2021 of Delhi- L, P-II, J and K-1. The policy gives permission of the development and the incentives provided for the good usage of the unused space of land and the permission is provisioned for the 400 FAR in respect to the current 150 FAR. The 15 percent of Far is also granted for the promotion of housing that is affordable.

To give residential facility to 95 lakhs population, an estimated 22,000 hectares of the land is should be pooled. The Land Pooling will ensure that the development of the civic, economic and social aspects of the capital of India and would encourage the huge amount of employment and investment.

As large as the 60 percent total share of land are issued to original land owners post infrastructural development of the land by policy of Land Pooling.

For the economically backward section, a series of cost-friendly houses of 32-40 sq. m size will be built under this policy. Among the total stock of housing, 50 percent will be reserved for housing the Community Service People that are acting for the service to owners and residents of Group Housing by the Developer Entity. These residents will be constructed at the premises adjoining to allotted site or on the site itself. Another 50 per cent will be put to sale to the DDA for revenue at the price of Rs. 2,000 per sq. ft.

But according to the real estate experts, DDA do not consist of in-team experts that can make a planning for such huge amount of population. They are of opinion that DDA should re-modify their RFP or global Request for Proposals and invite all the internationally-acclaimed associations that could help to design the smart and modern plans for the zones.

There are three challenges for DDA: